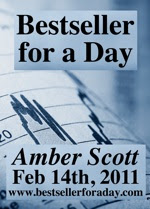 Series: none
Source: Author, no compensation given for an honest review

From Good Reads:
Playing cupid isn't a reward; it's Millie's punishment. If she doesn't find repressed, divorcee, Brooke, true love in the next thirty days, Millie'll lose the one thing in this life sentence worth fighting for, her partner. Just two problems: First, Millie sucks at matchmaking. Second, too young, too hot, Elliott keeps getting in Millie's way.

My Review:
PLAY FLING tells the story of two couples: Millie and AJ, and Brooke and Elliot. While it might seem like the relationship that develops between the latter is the main part of the novel, Millie and AJ's contribution is just as important. Neither love story takes over the plot line, so the reader is treated to two very different point of views.

First, there is Brooke, who finds herself attracted to a much younger man, and the student assistant of one of her professors. Amber Scott skillfully shows a successful woman, who can still be vulnerable and unsure when it comes to men. Especially one that might make her look like a "cougar". She throws in the break-up of Brooke's marriage over seeming "drifting apart" and inattentiveness to further show the woman's reluctant attitude toward finding love again.

Then there is Millie. Millie, who seems normal at first. Perhaps she is a little flaky, and from the first chapter, even seems somewhat selfish. But, it becomes apparent that she thinks keeping Elliott away from Brooke is in the other woman's best interest, and the only way for Millie herself, to save the relationship that she has with AJ.

There were a few times while I was reading, that I wanted Millie to butt out of her supposed friend's life. As the reader, I could see that Elliott could be a good match for Brooke. It becomes apparently clear that Jason and Brooke's relationship is dead, and should not be resurrected, and yet, Millie keeps trying to push them together. But, at the same time, her character did remind me of the well-meaning, but a little dense when it comes to other people's love lives friend, that most women have, or have encountered in their lifetime.

I enjoyed Scott's style of writing, and the story that she had to tell. However, PLAY FLING is not as light-hearted and fluffy as the cover art might lead one to think. This is not a beach read type of book. It's one that really delved into the psyche of Brooke, an "older" woman, and showed a true journey from first lust to deeper commitment.

Recommend, if you liked:
Ink Spots by Lissa Matthews
Maybe This Time by Jennifer Crusie

Links for the author and books: