Series: none
Source: Publisher via NetGalley, no compensation for honest review 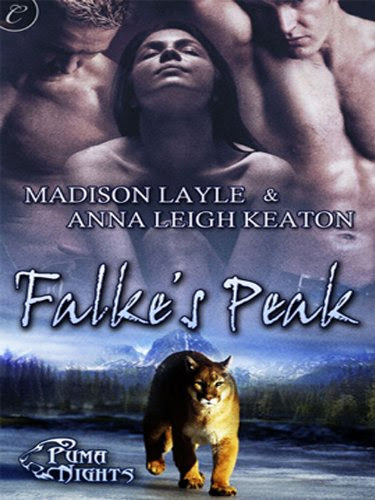 From Good Reads:
Stressed out ad-exec Dakota wandered into Catamount Outfitters in search of a guide for a wilderness excursion. She didn't expect to be greeted by not one, but five of the most ruggedly delicious-looking men she'd ever seen. Not to mention a live cougar guarding the shop.

Eldest brother Axel agrees to guide Dakota on her mountain trek. In cougar form, Axel's twin, Gunnar, was there as a protection from predators—but he had his eye on the sexy client instead.

While the rule with clients was "paws-off," both Axel and Gunnar couldn't resist Dakota's seductive Native American beauty and determination. As cold days led to hot nights in the cabin, Axel and Gunnar wondered if they'd finally found a woman strong enough to tame them...

I Liked -- Plot: Falke's Peak is a little bit different than most of the menage books that I have read. Why? Because for a portion of the book, Dakota is only aware of "one" man. The brothers are twins, and one stays in cat form while the other is human. Though Dakota spends time with both, she doesn't know this. It's an interesting take on the "get to know each man outside of the menage" plot point that usually happens. I'm usually not a fan of deception, but Keaton and Layle handle this in a way that I didn't get pushed out of the story, or start to dislike the men for their lie.

I Liked -- Character: It's actually hard for me to choose just one of the characters from this book that I liked the best. The twins were each their own man, and had characteristics that separated them. There was also good conversation between the two about how they felt on the topic of sharing a woman. But, I did like Dakota very much. And, not just for what she stood for: a female character that represented a person of color, where her color wasn't the most important part of the novel. But, also for the gamut of emotions that she expressed. Too often, a menage will (to me) seem to be accepted all too readily by the female, and smex-ing takes over the book. Or, there is too much denial of the relationship, and I feel like saying, just do them already! Two hot men want YOU! FALKE'S PEAK kept me from either of these extremes nicely.