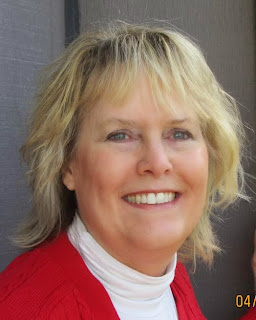 Having to wear glasses in elementary school can scar a person for life. Dubbed a nerd at an early age, Cherise Sinclair has been trying to live up to the stereotype ever since. And what better way than being an author?

Master of Freedom is probably one of my favorite Cherise Sinclair books to date. I really liked the progression of Atticus and Gin's relationship, as well as the steamy attraction that each felt for the other. I also liked how there was resistance on both sides in terms of either character wanting to get involved in a long term relationship.It always seems as if there is one character that gets in their own way and manages to hinder a developing relationship, but in the case of Master of Freedom, both Atticus and Gin had past issues and relationship baggage that needed to be dealt with.

Sinclair not only has a way with words, but she seamlessly mixed seamy hot sex scenes, romance, and every day life, as well as dramatic and suspenseful tension, into Master of Freedom. I loved reading Atticus and Gin's story, as well as catching up with the lives of characters from previous books in the series. I'm hoping Sinclair will write a story (full length or novella) about Atticus' brother Sawyer. He was one of my favorite characters in Master of Freedom and I would love to see him have a storyline of his own.


Note: The following excerpt is meant for readers 18 years and older.

Excerpt from Master of Freedom:

Yes, this man was special.

And she wanted him more than she’d wanted anyone before. She frowned into her drink, and when she looked up, he was watching her, sipping his wine, and waiting.

With some of her dates, she’d felt their impatience, as if they tired of wading through the getting-to-know-you phase before they could get some. Atticus displayed no urgency, just the quiet patience of a very experienced man.

The knowledge increased her low-key arousal.

Far, far sooner than she should have finished, she drank the last of her wine.

She nodded. Although the air was chilled, her body felt like a heat pump, and her stomach quivered with nerves. She hadn’t had many lovers and no one since meeting Preston. No one after.

He studied her for a moment, eyes narrowed. “Talk about mixed signals,” he said. “I can take you back to your car, sweetling, if you like. Or I can light a fire, and we can sit and talk.”

“Or we can go for the third option.” She set her glass on the island, grasped his hand, and pulled him down the dark hallway. Hopefully his bedroom was at the end of it. “Let’s get this out of the way.”

“You make sex sound like a trip to the dentist.”

“There have been—” Her mouth snapped shut. Blushing, she stopped dead, not believing what she’d started to share.

“I see.” His chuckle was low. “I’ll try to make this feel better than a long, hard drilling.”

The suggestive words delivered in his deep baritone sent tingles over her skin.

With his hand on her stomach, he backed her into a room, even as his mouth covered hers, taking possession. The minute her arms wrapped around his neck, he curved one hand under her ass and pulled her up on her toes. His thick erection pressed against her pelvis.

When he lifted his head, she was breathless.

Her skin simmered with heat. She glanced at the bedroom and saw no interesting kinky shackles or piles of rope or handcuffs. “So we’re going to do this the old-fashioned…um, vanilla…way?”

“Mostly.” He undid her bustier. “I’m not going to tie you down, sweetheart. Not until you know me better.”

“Oh. Okay.” That surely wasn’t disappointment she felt. The sensation of his scarred knuckles brushing each newly bared inch washed the emotion away.

She glanced up at him and saw his half-smile and the comprehension in his expression. He knew…

Flustered, she lifted her hands to undo his shirt. “You’re overdressed.” 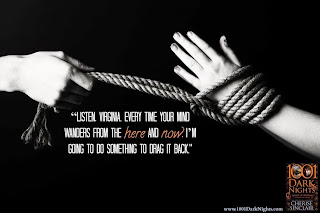 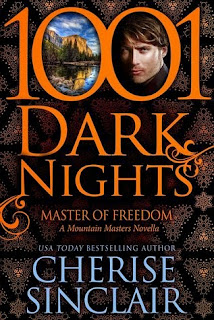 Detective Atticus Ware gave up his beloved Idaho to start again in the mountains of California, close to his imprisoned brother. He has a rewarding job and friends, but the experienced Dominant wants more than the Do-Me submissives who flock around him. He needs a woman who will give her heart as well as her body.

Finally, Atticus has found the woman he wants in his life. In his bed. In his cuffs. But she’s not only his brother’s therapist, but also works in a prison. How can he tolerate his woman walking into danger every single blasted day?

Gin knows she has no future with Atticus Ware, but still, hope is rising in her heart.


Check out the rest of the Mountain Masters and Dark Haven Series on Goodreads HERE.