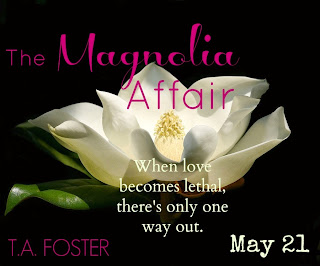 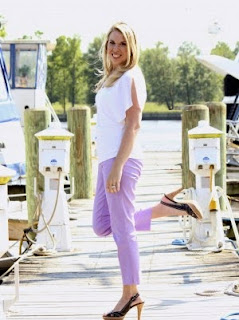 T.A. Foster grew up catching rays and waves along the North Carolina Outer Banks and now resides in the state with her husband, three children and canine kiddo.

She has an undergraduate degree in Journalism and Mass Communication from the University of North Carolina at Chapel Hill and a graduate degree in Educational Psychology from Texas A&M University. When she’s not chasing her two-legged and four-legged children or trying to escape for date night, you can find her reading, writing, or planning her next beach trip. 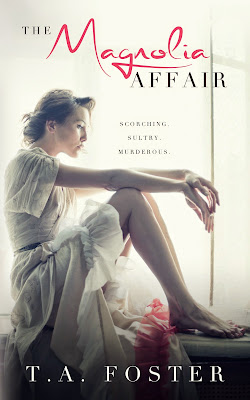 Excerpt from The Magnolia Affair:

I am having an affair.

I know what you’re thinking. There has to be a reason. There needs to be a reason. Something acceptable like after five years of marriage I had spent too many nights alone with a glass of wine. Or when my workaholic husband was home we slept back to back, as if he had forgotten how to touch me.

You would understand that. You’d probably pity me and say, “Bless her heart. How could a husband treat his wife that way? What else could you do?”

You’d want me to tell you that the only thing we exchanged was conversations about the weather and updates on what needed to be added to the grocery list.

It would probably calm the judgment bubbling to the surface if I described how we ate dinner in front of the television, commenting occasionally on a drastic cliffhanger to be continued next week.

You’d give me a look of pity if I told you he stopped noticing when I got my hair cut or if I walked into the room in a new dress.

The story would start to come together in your mind if I painted a picture of how we went to bed at separate times out of habit, forgetting that we once scheduled everything around the other.

You could see it happening. You would almost feel it slipping away like water through your fingertips. It might create doubt about your own marriage, even though you’d shake your head, knowing that couldn’t happen to you. Little pieces of your own truth filtering in between the images you have of us.

It wasn’t my fault. That’s what you’d tell yourself. You’d probably want to hug me and console me with soothing words, “It’s understandable. No one can blame you.”

But I have a confession. Something you won’t want to hear. Words that will haunt you more than the excuses. None of it is true. My husband didn’t do those things. There isn’t a single thing that led me to another man.

I am having an affair for the worst possible reason. Because I can.


Audrey Kingston has the perfect life she always wanted. An adoring husband, a beautiful house, book club nights with friends. It was idyllic. It was serene. Until Paxton Tanner, candidate for state senator, moved in next door.

Seduced by his undeniable charm, Audrey’s life becomes unrecognizable as she gives in to her impulses.

The affair becomes deadly, and she gets tossed into a political scandal that leads all the way to the governor’s office.

When love becomes lethal, there’s only one way out.