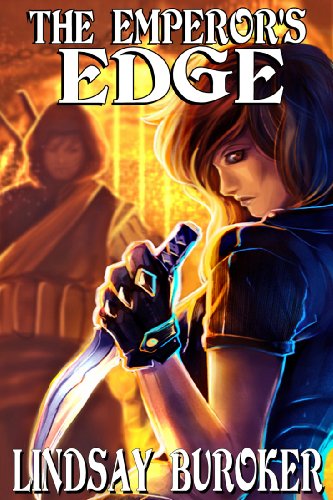 From Good Reads:
Imperial law enforcer Amaranthe Lokdon is good at her job: she can deter thieves and pacify thugs, if not with a blade, then by toppling an eight-foot pile of coffee canisters onto their heads. But when ravaged bodies show up on the waterfront, an arson covers up human sacrifices, and a powerful business coalition plots to kill the emperor, she feels a tad overwhelmed.

Worse, Sicarius, the empire's most notorious assassin is in town. He's tied in with the chaos somehow, but Amaranthe would be a fool to cross his path. Unfortunately, her superiors order her to hunt him down. Either they have an unprecedented belief in her skills... or someone wants her dead.

My Review:
This is the second book that I have read by Lindsay Buroker in a very short time, and it certainly won't be the last. From previous experience, I knew to expect adventure, a little danger, great characters, and a multi-faceted story line to go along with Buroker's engrossing writing. I wasn't let down. In fact, I think I liked THE EMPEROR'S EDGE just a little bit more than I did the first book, ENCRYPTED.

While this book takes place in roughly the same world as ENCRYPTED, the timeline is years later, and the planet is a different one in the overall empire. The assassin, Sicarius, who had a supporting role previously, now gets his own book. Here, he teams up with Enforcer Amaranthe Lokdon. The Emperor's life is in danger, and some of his most trusted associates have betrayed him. Working behind the scenes, and largely unknown to the Emperor, Lokdon and her "team" must find a way to thwart a possible coup, while learning to trust each other.

Buroker has a really attractive writing style to me. Though, the female heroine gets to show everything from her point of view, Buroker makes excellent use of dialog to further the plot, as well as create relationships between the characters. I also like how she makes her heroines attractive to smart readers. There's no dumbing down at all. In her first book, the heroine was a cryptographer, and in this book, she is a law enforcement officer. There are times when Lokdon is quite vulnerable and unsure; unsure of herself, how well her plan will work, and whether she can get her team to work cohesively. However, she always comes off as resourceful, and even stands up to Sicarius, a notorious assassin.

I would definitely recommend THE EMPEROR'S EDGE to any reader that likes fantasy and adventure. Though the romance angle isn't played up too much, I think that anyone who has a romantic heart would enjoy the journey that Lokdon, Sicarius, and the rest of the characters take in this book. And, I'm happy to know that Buroker has more books planned for the future.