A Flash of Fiction: Day One (NOVEMBER) 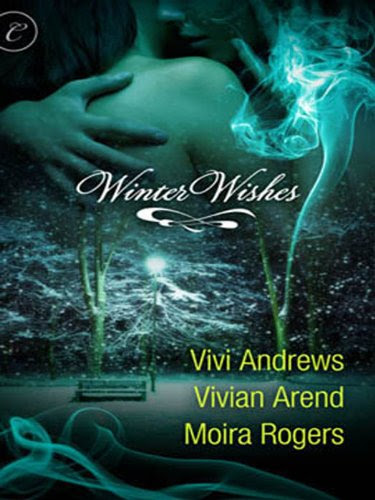 I received this book for free from NET GALLEY, in exchange for an honest review.


From Good Reads:
A woman has the Christmas Eve from Hell. Two cat shifters play naughty games. And a witch brings out the beast inside the man. The magic of the season takes on a whole new meaning in these three fantastic—and festive—novellas from some of the best voices in paranormal romance.


I Liked -- Plot (TANGLED TINSEL): I admit that I am not much of a cat person, but Vivian Arend made me laugh out loud with the antics that she put her cat shifters up to. Because El is a cop, and she is ordered to protect the irascible Kyle from some unknown harm, she ends up fake engaged to him. The two of them are now obliged to spend the winter holidays together under El's parents' roof. Kyle wants to get in her pants, and El has to embrace the side of her that isn't human. The side of her that wants Kyle with equal fervor.

I Liked --Character (TANGLED TINSEL): Though Kyle comes off as a layabout, he is anything but. I love his lighthearted outlook on life, and the great embodiment of cat shifters that Arend manages to show in his character. He's basically what I love about reading Arend. She builds characters that can be playful, sexy, protective, and badass all at the same time.

I Liked -- Plot (NO ANGEL): Wow. This is the first work of Vivi Andrews' that I have read, and I was certainly not disappointed. In a contemporary world where angels and demons are common-place, Andrews matches up the demonic Jay (Jevroth), step-son to the Morningstar, and Sasha, a seemingly normal human. I was impressed at how involved I got while reading about Sasha's quest to retrieve Jay from Hell.

I Liked -- Character (NO ANGEL) Though I usually do like a bad boy, Sasha was the character that I really enjoyed while reading this novella. Clearly she has a right to her anger toward Jay. Not only does it seem like he wants to break up with her, then he disappears into a hell vortex, and later when she sees him again, she finds out that he has been hiding his demon ancestry. But, Andrews writes Sasha true. Yes, she gets upset with Jay, but she also recognized her deeper feelings for him. AND, she doesn't rely on him to get the two of them out of Hell.

I Liked -- Plot (FREEZE LINE): Moira Rogers rocks the post-apocalyptic paranormal story line! I never have anything bad to say about any of Rogers' work, and this is no exception. It's not just that FREEZE LINE involves a world split between heat and cold, but also a world split between witches and werewolves. One is infinitely dangerous to the other, both in terms of weather and humanity.

I Liked -- Character (FREEZE LINE): Typically, the werewolves in Rogers' books are at the very least, semi-alpha and very protective. Shane embodies these attributes, but he never seems derivative of other male characters that Rogers has written about before. Though he cannot survive in the same temperatures that Nadia needs to exist, he still escorts her to safety when she is at her most vulnerable. He leashes what he considers his "animal", and though the two have an explosive chemistry, he still comes off as tender and caring.


Links for the authors: