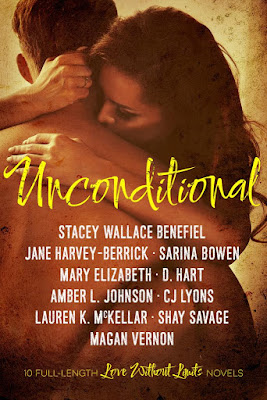 But living a half-life, living with regrets, that’s no life at all.

People say we’re broken, not like other people. Maybe that’s true—ability, disability—what’s in a word? So whatever the world throws at us, we won’t stop, we won’t crumble. When we love, we love hard.

Crossing by Stacey Wallace Benefiel
He stole her lipstick…and her heart.

Twenty-year-old Dani Walker can’t believe her luck when she’s paired up with the gorgeous Liam Garrett as her Acting I scene partner – or when he ends up in her bed. Being a Plain Jane with a mouth on her hasn’t exactly served Dani well in the guy department. In fact, she’s had nothing but one night stands.


The Education of Caroline by Jane Havery-Berrick
Ten years after their first affair, Sebastian and Caroline meet again. Now a successful journalist, Caroline heads out to report from the front lines of the war in Afghanistan. Love is the last thing on her mind when she crosses paths with Marine Chief Sebastian Hunter.


Falling From The Sky by Sarina Bowen

Until his accident, bad boy Hank “Hazardous” Lazarus had everything: a gorgeous girlfriend, a career as a freestyle snowboarder and a spot on the US Olympic team. Could he possibly meet the love of his life in the last place he ever wanted to go--the hospital?


True Love Way by Mary Elizabeth
Some days are brighter than others, but Penelope Finnel is invisible behind the colored lenses of her heart-shaped sunglasses. Dillon Decker hopes he is the cure to her madness. But when friend turns to lover, and lover turns to caretaker, how much can either of them tolerate before they’re swallowed whole?


Forgotten Treasures by D. Hart
Fate took away Baylor's past, giving her a second chance at life, but when faced with a choice to move forward, leave it buried, or follow her heart, she struggled with her basic need to survive and be loved. When she met Brandt, he gave her a reason to rebuild a life full of forgotten treasures.


Puddle Jumping by Amber L. Johnson
When it comes to love there’s no such thing as conventional.

Their friendship grows into love, even as Colton does not express it in words. But one decision threatens to break down the world that Lilly has tried so hard to integrate into and she must figure out if the relationship can survive if they are apart.


Lost In Shadows by CJ Lyons
A West Virginia mountain, the middle of a blizzard, killers on his trail…no place for a city boy like Lucky Cavanaugh, an ATF explosives specialist.

Out-manned, out-gunned and shot, he takes Forest Service Wildlife Biologist Vinnie Ryan hostage until he convinces her that he’s one of the good guys.

Vinnie heals not only his injuries but also his broken heart. But when they uncover a terrorist plot, Lucky is forced to choose between duty and passion, risking the life of the woman he loves in order to save the lives of thousands.


The Problem With Crazy by Lauren K. McKellar
When eighteen-year-old Kate’s father turns up drunk to graduation, she knows something is wrong—really wrong. What she doesn’t expect is a hereditary disease that will turn her life around.

The Problem With Crazy is a story about love and life—about overcoming obstacles, choosing to trust, and learning how to make the choices that will change your life forever.


Surviving Raine by Shay Savage
Isolated on a raft after their ship capsizes, an alcoholic death-match fighter and a young woman have to face the elements as well as their entwined pasts. Bastian can survive in the harshest environments, but can he survive Raine?


The Only One by Magan Vernon
Honor student, manager at the campus coffee shop, owner of an impressive sweater collection – Melanie Wilder has it all together. Then John “John Boy” Walden strolls into her life wearing nothing more than an impish grin and all-too-revealing loin cloth.

Soon, make-out sessions replace homework, lust triumphs over work. And to further crumble her perfect world, an unexpected phone call threatens to take away everything she’s worked for.