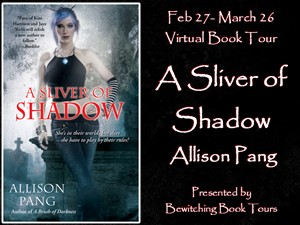 I am very happy to welcome Allison Pang to Read My Mind today. She's the author of A BRUSH OF DARKNESS, the first novel in the Abby Sinclair series, and A SLIVER OF SHADOW, which continues the series. I personally loved both books. Check out my review of A SLIVER OF SHADOW.

Allison has provided an excerpt from the first chapter of A SLIVER OF SHADOW, so read on to get a taste of this fantastically imagined urban fantasy. 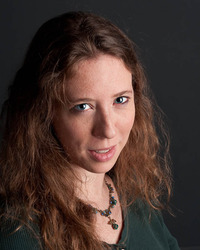 About The Author
A marine biologist in a former life, Allison Pang turned to a life of crime to finance her wild spending habits and need to collect Faberge eggs. A cat thief of notable repute, she spends her days sleeping and nights scaling walls and wooing dancing boys... Well, at least the marine biology part is true. But she was taloned by a hawk once.  She also loves Hello Kitty, sparkly shoes, and gorgeous violinists.
She spends her days in Northern Virginia working as a cube grunt and her nights waiting on her kids and cats, punctuated by the occasional husbandly serenade. Sometimes she even manages to write. Mostly she just makes it up as she goes.
Website | Blog | Twitter | GoodReads | Facebook

Sonja’s warning slid around me with a wash of power. Startled, I shot up from where I huddled beneath a cluster of fallen logs, decayed bark scattering as a set of claws shredded my hiding place. I ducked, the sharpened talons slicing the air with a deadly whistle.

Grinding my teeth, I narrowed my eyes and concentrated, letting my own form shift. Small, furry, fast . . .

The Dreaming rippled. I bounded away, sleek and long, haunches bunching and then springing forward to propel me into the darkness. Sonja’s low growl of frustration echoed behind me. I didn’t know exactly what form she’d taken, but my rapidly twitching nose instantly recognized the acrid scent of something feline.

The urge to go to ground vibrated through my little body, but I pushed forward, leaves sliding beneath my paws. All around me were shadows as my nails dug into the moist earth. The scenery blurred past in a haze of ragweed and pine trees, needles brushing my fur. I couldn’t hear Sonja anymore and I paused, my ears rotating to cup the darkness.

The faintest breeze caught my attention, and I instinctively flattened against the grass as Sonja swooped past, this time in the shape of a barred owl.

She wheeled, but I bolted, aiming for the tinkling stream nearby. Shedding the last vestige of the hare, I leapt toward the surface, my skin sluicing into scales as I slithered into the depths. My gills opened to shunt out the water, gravel scraping my pink salmon belly.

“Good! Very good.” Sonja applauded from the banks. The succubus had shifted into her more human form, the bloodred feathers of her wings shining in the moonlight of the Dreaming. Her skin had an alabaster purity that could never be matched by anything mortal. Between the hidden depths of her dark eyes and the scarlet wings, she seemed more fallen angel waif than daemon seductress. “You can come out now, Abby. I think that’s enough for tonight.”

My tail flicked me through the current as I changed again, pulling together the part of what made me, me. Emerging from the water, I squeezed the drops from my hair and pushed it from my face. “I’m getting better.” I wrapped the Dreaming around me until I was dressed in a pair of jeans and a shirt.

Sonja nodded cautiously, smoothing out the wrinkles of her own tank dress. “You are, but you’re still barely tapping your potential.” She gestured around us with a hint of irritation. “These are your Dreams. You limit yourself to your own sense of physics. Becoming a rabbit was fine and you’ve certainly improved your shifting ability—but why not change the ground, or the trees?” She yanked on a damp ringlet of my hair. “Why waste time with this when you could instantly dry it? If you’re ever going to really, truly defeat your nightmares, you’re going to need more than just a few parlor tricks.”

“I don’t think that way. You know that. We’ve been through this how many times now?” I concentrated on the water flowing over my toes before giving her a wan smile. “Have patience with me. I’m new to this.” One dark brow rose at me sourly, but she let the lie pass without comment.
In truth it had been over six months—six very long months. She was frustrated, I was frustrated. I’d been banging my head against the metaphysical equivalent of a brick wall in my attempts to break free from the confines of everything I’d ever known in an effort to make sense of the dark shadows of my inner psyche—which often took the form of vicious, man-eating sharks.

My nightmares certainly hadn’t paid the slightest bit of attention either way.

If it hadn’t been for a certain incubus awakening me to the existence of the Dreaming nearly eight months ago, I would have continued to experience my familiar nightly cycle of waking up from the intimate practice of having the flesh shredded from my bones. That should have meant something.

On the other hand, sometimes ignorance really was bliss. Discovering that I could visit the place where my dreams occurred was one thing. Being told I could potentially bring my nightmares to life was something else entirely.

I understood Brystion’s motivation of having his sister teach me the finer points of Dreaming—we weren’t exactly dating anymore, and my chances of focusing long enough past the hurt of his
leaving was a bit of a toss-up. I couldn’t argue against the need to control myself better, though I wasn’t sure Sonja saw me as anything more than a chore.

Still. The faint scent of the sea rolled past us as though to emphasize the point and I shuddered. Dreams or not, I had no wish to see the sharks again anytime soon.

The succubus sighed at my woeful expression. “You’ll get there. You just need to concentrate.”

I waggled my nose, annoyed. I might not quite grasp everything she tried to teach me, but I wasn’t completely ignorant. “Is that all there is to it, Endora?” My eyes narrowed as I stared at her, the power rushing through me, a thin rivulet of the Dreaming taking form in my mind.

Thanks to the generosity of Allison Pang and Bewitching Book Tours, there is a rafflecopter giveaway at the bottom of this post where 10 (yes TEN!) lucky tour followers will win a copy of A SLIVER OF SHADOW.

From Good Reads:
Just when her new life as a TouchStone — a mortal bound to help OtherFolk cross between Faery and human worlds — seems to be settling down, Abby Sinclair is left in charge when the Protectorate, Moira, leaves for the Faery Court. And when the Protectorate’s away…let’s just say things spiral out of control when a spell on Abby backfires and the Faery Queen declares the Doors between their worlds officially closed.
The results are disastrous for both sides: OtherFolk trapped in the mortal world are beginning to fade, while Faerie is on the brink of war with the daemons of Hell. Along with her brooding elven prince Talivar and sexy incubus Brystion, Abby ventures to the CrossRoads in an attempt to override the Queen’s magic. But nothing in this beautiful, dangerous realm will compare to the discoveries she’s making about her past, her destiny, and what she will sacrifice for those she loves.
Purchase book at:
Barnes and Noble | IndieBound | Books-A-Million | Amazon
Available formats: Print (Mass Market Paperback), NookBook, epub, Kindle